The brutal, early months of the COVID-19 pandemic forced New York rapper Jim Jones and his team to open Quarantine Studios as artists and producers had no way of meeting up to get work in. The new platform allowed artists to record while being in two different places simultaneously, and the Harlem native used it to his benefit.

Jones teamed up with HipHopDX’s 2021 Producer of the Year nominee Harry Fraud for his latest release, The Fraud Department, and it’s another addition to the recent hot streak Jones has been on since dropping Wasted Talent in 2018.

One of the first projects to come from this new platform showcases the vast improvement Jones has made in recent years with his bars. The 11-track album has Jones putting those rhymes up against Dave East, Belly, French Montana, Curren$y, Jay Worthy, Conway The Machine and more.

When asked what pushed him to work with the legendary producer, Jones explained it came from his reconciliation with longtime Fraud collaborator, French Montana. Jones and French dropped the visual to their new track “Bada Bing” on Friday (March 5).

“We wanted to do an album after me and French settled our differences,” Capo told HipHopDX via Zoom. “Me and Harry Fraud had been in touch, and we were able to have a real conversation where he was telling me about how he’d been following my career for so long and what Dipset and everything did for him, it was just pretty dope.”

Jones continued, “I, in turn, had to tell him how fire his beats is and shit like that. So it was mutual respect, and mutual that we both wanted to work with each other, so we just started working.”

The Fraud Department is just a piece of what Jones has in store from all the music he’s been cooking up inside Quarantine Studios. On top of working with Fraud, Jones linked up with several other big name producers for five different albums he plans on releasing in 2021.

There’s a line on the album opener “Laps Around The Sun” where the Harlem rap star says, “Put so much work in I think that God made ten of me (Grr)/Shit, they still blast for me, I got some godly tendencies.”

On top of recording five albums in a matter of months, Jones is running several companies in a time where businesses have been at a standstill. Jones doesn’t need to pick up the mic, yet he still finds a reason to do so.

When asked about what pushes him to make music despite doing it all in his 25-year career, Jones said it’s a personal reason.

“I got a chip on my shoulder and something to prove to myself, not to nobody else, that I’m way iller than your favorite rapper,” he said with a smirk across his face.

He added, “What used to be a hustle turned into a passion, and my passion turned into my competitive spirit, and me being a competitor, I need to show myself that I am way iller than your favorite rapper.”

HipHopDX spoke more with Jim Jones about The Fraud Department, what he admired about Fraud’s production skills, the five other albums he worked on, his reconciliation with French and more.

HipHopDX: With all the businesses you have so far, it seems like you always have your hands on a new idea or project like Quarantine Studios. How are you able to have your ear to the new opportunities that are out there?

Jones: You know, when I did the first album, I was smart enough to look at Pro Tools and know that the world was going digital from how they was making music. I’m like, “Shit if that computer does the same thing that this laptop does, then why we can’t record off this laptop wherever we at in the world?” An engineer was like “You damn sure can and there’s a few rock and roll artists who does something like that. And I could show you how to kind of do it.” I got what I needed and he started giving me a crash course in engineering and that’s how me, Cam and everybody started recording. So I figured out a loophole on how to fuck up the recording budgets for artists that come after me and things like that.

I’d been the poster for this shit for a long time. I actually wanted to create something called “Studio in a Book Bag” at that time but I don’t know if people thought I was crazy or people were just mad that I had such a dope vibe but I couldn’t get the proper help that I deserved. Fast-forward to 2020, and I feel like I’ve got my pulse on the same type of event, and this time, I’m definitely going to capitalize on it now. And we got so much at our fingertips, as far as the internet is concerned, that I don’t need the people that I was looking for to help me anymore, because I can tap into whatever I want to just go on on the web at home.

HipHopDX: How did The Fraud Department come together?

Jones: The Fraud Department title came from whenever we get on Quarantine Studios and before we start recording, I would say “the Fraud department and I’d just started tagging it. So everybody was like that name sounds like the name of the album. I was like shit it sounds like it to me. So that’s how the name of the album came about. Shout out to Harry Fraud shout out to John Sparkz.

HipHopDX: Harry Fraud is a legend in his own right. What was something about his art that you admired from working with him on The Fraud Department?

Jones: He’s just a different type of engineer. Engineers like that, they approach, they approach it differently. They definitely studied the game. Sonically, he got all type of different beats and where we were at when we were working on the album, was a lot going on at that time with George Floyd, God bless his soul, and the country was in an uproar. So we was at a real political moment, and the music kind of reflects that if you listen to it and hear a lot of, some of the words of choice that I use and things like that.

So that’s where we was at, and he really kind of brings the sound out and I respected what he did. He knew how to curate from all the records that we did and narrow them down to the album that we have today. Just seeing him mix the records down, add hooks add features, like it was just dope. By the time I heard the full record, it was like 95 percent done. You know what I mean? So you can’t ask for much more.

HipHopDX: Since Wasted Talent, you’ve been hitting your listeners with quality bars. How are you finding this level of consistency?

Jones: I couldn’t tell you that. I just know that I continue to live life and as long as I’m able to live life, I’m going to be able to do music. Music is like anything else. It’s like a jump shot. The more you shoot, the better your jump shot is going to get and I’ve been shooting for a while.

HipHopDX: On the features side, you have another fire collaboration between you and Curren$y on “Say A Prayer.” What is it about him that makes you want to work with him so much?

Jones: Curren$y is probably one of the few friends that I’ve had in the game for so many years. Not only do I respect his music, I respect his hustle and his business sense. He’s one of the few independent artists and I mean real independent artists that really makes a lot of money and shit like that without depending on all the commercialism that the industry feeds off of.

“Say A Prayer” is a good feeling. I don’t know but Curren$y sounds like he was mad at me the way he went crazy on that record. I really enjoyed his verse. I mean, I really enjoy his music period, but it seems that when we do music together, we kind of bring the best out of each other when it comes to doing the music so I respect that.

HipHopDX: “The People” is one of the strongest records you have in your whole catalog. What was on your mind while making that record regarding George Floyd, Breonna Taylor and the Black lives that have been lost or affected by police brutality?

Jones: That record was done on the seventh day of the riots. I was recording while I was watching CNN on my projector, and shit like that for all those days. Being stuck in the house and just seeing all the madness that was going on, and me not knowing how to contribute or know who I was to the cause and I just had to sit back and understand the biggest thing I can contribute is myself and my artistry. People need some things to keep battling on. Because it’s not easy out there. I called Harry like, “We got to do something.” Harry was like, “I already got the beat.” He sent me the beat then we just went in.

HipHopDX: The Fraud Department wasn’t the only album you were working on with this new innovative studio.

Jones: I was able to manipulate a few different platforms and make it work in my own favor and virtually in real time with no latency. I’ve recorded six albums like this so far. The Fraud Department was the second album, and the first was the El Capo deluxe. After this project with Harry Fraud we dropping the one with Scram Jones. After that is Hitmaka, then DJ Drama. We working and this is something I’ve been working on for the whole shutdown, and it’s some real quality work too. I’m proud.

HipHopDX: So we have the joint with Scram Jones called The Joneses, Hotter Than Summer with Hitmaka, Down South Kicking Up Top Game with Zaytoven and The Quarantine Studios Compilation. Did I get those right?

Jones: Yes and then we also have a DJ Drama and Gangsta Grillz Seven Day Theory Part 2.

Jones: It ain’t no downtime. I mean, people use the pandemic and everyone is losing energy and going frantic. I use it to really put some work in, and now that work is about to turn into some money. 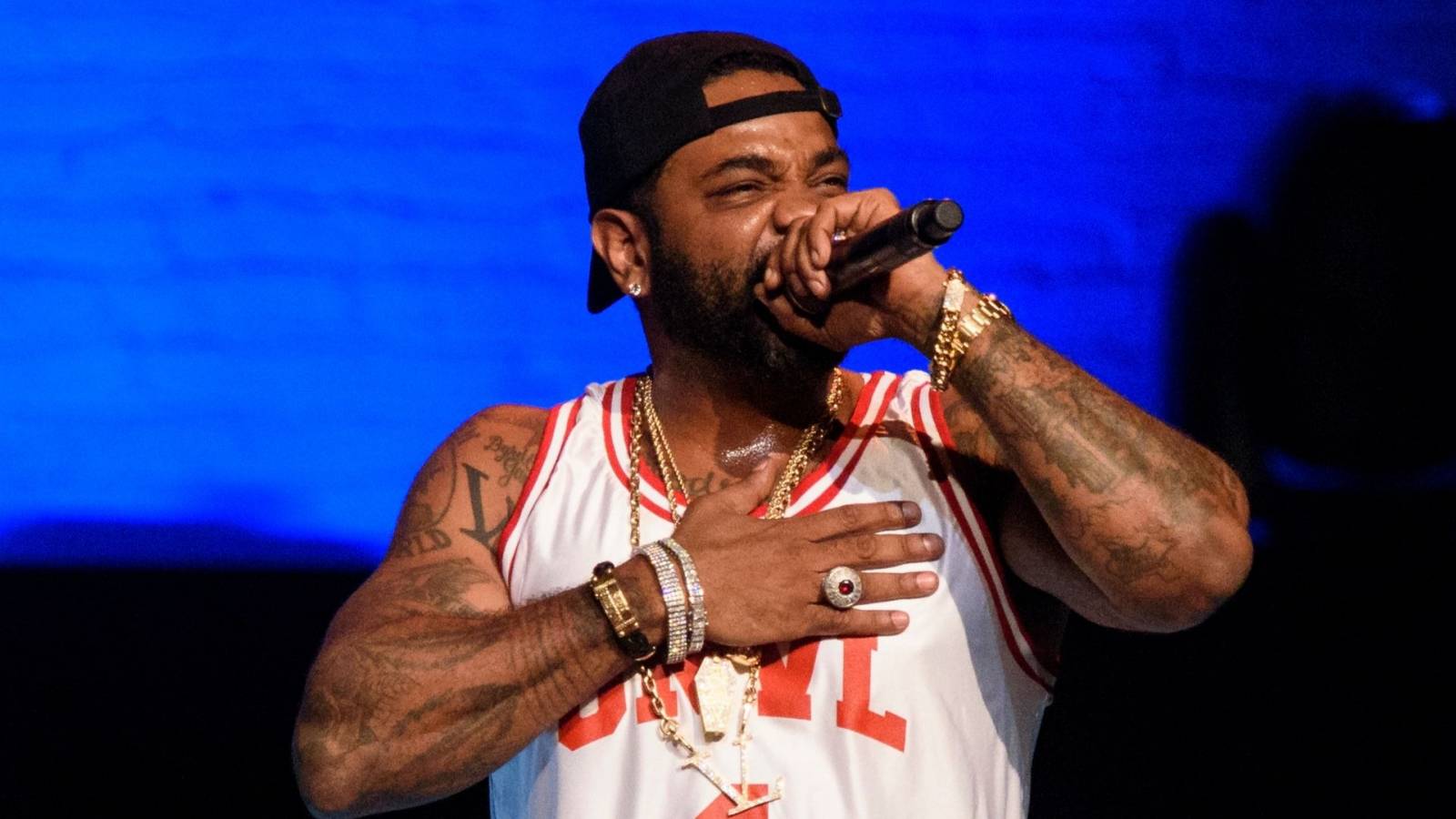 HipHopDX: With you working with so many different producers was there a project where you had some trouble adjusting to?

Jones: It’s not really no trouble to do music for me. It’s really no trouble at all. What I was doing as far as doing projects with different producers and things like that, I thought using different sounds would be a dope challenge for myself and good for the people to hear.

When I see a challenge, it doesn’t pose a challenge for me in that, in that matter, just more like, the challenge is me doing music that people are not used to hearing me on in that capacity, as far as the whole album, our whole project. But I’m not in when it comes to doing music. That’s just the easiest thing that I could do.