INTERVIEW – Described by Ken The Man as “a big ass confidence booster,” her new mixtape 4 Da 304s is 30 minutes of bass-heavy empowerment anthems for women to turn up to, recorded and released over the quarantine. The pause put on the world proved beneficial for Ken to sit down and finally craft a project after a whirlwind year on par for that of a burgeoning rapper, but releasing something when you can’t promote in the traditional methods could be tough.

The artist born Kentavia Miller was prepared, though.

After turning down nearly every record label in search of a deal that’s better structured toward ownership of her music, Ken and her manager Melissa Keklak opted to independently release 4 Da 304s and fund the rollout themselves. Thus, the 304 House was born – a one-week media hub in Houston branded with all things Ken, all things 4 Da 304s and all things late ’90s/early 2000s (as the 304s is a callback to a simpler time of beeper codes.). Ken conducted all of her interviews from there and went Live with fans to celebrate the EP’s release and its No. 9 debut on the Apple Hip Hop charts.

Talking to HipHopDX from the 304 House, Ken explained how the pause forced on the world from the coronavirus pandemic ended up helping her finally complete a project that fans have been waiting on since her “He Be Like” single blew up in spring 2019.

“I always tell everybody I was one of the people in quarantine that kind of needed that slow-down because I never got to doing the tape,” Ken says. “I kept avoiding it like I was almost scared or something. It kind of helped me stay a little more focused because there was nothing more that could occupy my time. All I could do was go to the studio.”

And while the tape came together quickly, the idea had been much longer in the making.

“It took a year to create the ideas of what I wanted but like, I made the tape in two months,” she explained. “I started in May and I finished like early July. Usually, I come up with my tape name and ideas before I even have songs, but this time I was coming up with the songs and I had no idea what I was going to name that tape!”

The inspiration wasn’t far off, however, as a song she was making “about some hoe shit” sparked a light bulb and she landed on the name. The stylization came from her business smarts.

“I don’t remember what song it was but it must have been some hoe shit but I’m making this tape and I would say, ‘Ooh, ’cause it’s for the hoes! I’m making this tape for the hoes!’” she recalled. “And then I said, ‘I could name my tape For Da Hoes! And then somebody told me a while back it’s hard to brand a curse word like worldwide on a broader scale so I was just like, ‘How can I make it not a curse word?’ And I said, ‘I’ma name it 4 Da 304s!

“That’s really how it came about because I was just talking about some free-spirited hoe shit and it’s not for nobody else but for the bitches that’s free-spirited,” she continued. “And it’s not even that nasty, it’s just a big ass confidence booster. People got the definition of ‘hoe’ wrong. I could have six bodies and I’ve been called a hoe just ’cause a nigga mad or the way I dress. When I say it’s “for the hoes,” I just say it’s for the bitches. Hoe is just life here, so that’s why I knew it’s gon’ really throw people for a loop when I describe what I mean. I just feel like it’s a way of getting what you want when you want it and how you express yourself.” 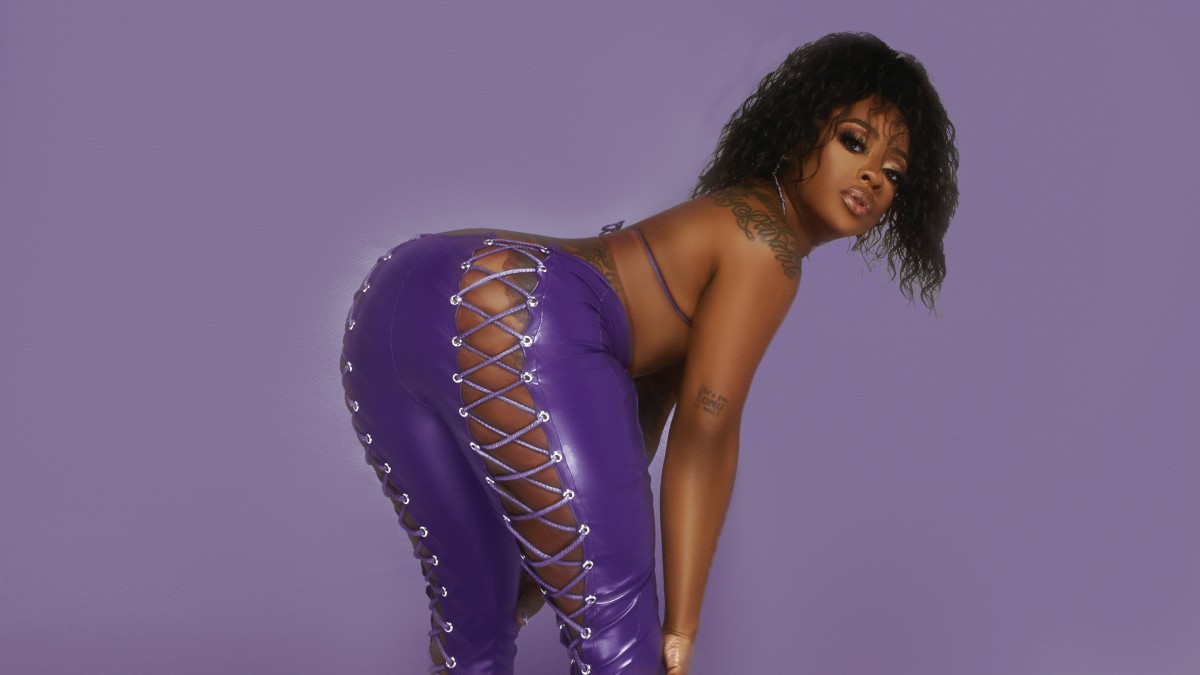 Raised On Lil Wayne, Ken The Man Talks Switching Up Her Style After Realizing The Punchline Era Was Over

Ken is able to make a living off of living her dream, but it’s all still surreal to her. Just one year ago, the Houston native was hustling by delivering food and writing songs in her car on her downtime. Now she’s rolling out her debut project from a multi-million dollar mansion explicitly branded for Ken The Man.

“I didn’t know I was going to be able to stop DoorDashing from the success,” she emphatically admits. “It’s so crazy because I got fired from Uber right as the song was taking off too. I was Ubering and DoorDashing and I was so stressed. I was like, ‘What the fuck am I about to do?!’ Who gets fired from Uber? I thought we was all cool!”

Things were far from cool but depending on the circumstances, most employers probably wouldn’t be too fond of the situation she’d found herself in either.

“I had actually got a case like right after I applied,” she recalled, half-laughing. “But it wasn’t even a terrible case and it was still pending so I guess they just renewed my shit. I’m like damn, I didn’t even want to get a job and I finally do and then I catch a case. I can’t win! I knew there just had to be something better in store at that point and it was! My song was getting a buzz, I started getting booked, I started getting like so many opportunities and it was just crazy – off this one basic song without a video that I wrote with my elbows while I was DoorDashing. It’s crazy, like I never expected it.”

And as the story so often goes with hit records, “He Be Like” almost didn’t happen at all.

“I really gave up on it too,” she recalls. “I was tired of re-recording and I didn’t like the way I sounded. I was like, ‘You gon’ just have to mix it ’cause I’m tired of dealing with it.’ I was tired of it. The version that y’all got – that’s the version I was tired of!”

Looking ahead, Ken knows the journey is only just beginning. While a hit record is an amazing start, it’s only a piece of a much bigger puzzle that comes with fickle fans and an ever-evolving musical and media landscape that can be for you or against you at any given moment.

“At the end of the day, we are literally in the field of people-pleasing – we can’t only just try to satisfy ourselves,” Ken says. “It gets stressful because it’s like damn, I’m tryna feed these people more! I’ll get more consistent sometimes and I’ll just see maybe one day my insights are going down versus going up and it do stress you out, but at the end of the day, you have to start back tapping in with what you started doing it for.

With more levels come more devils, but Ken is doing her best to stay grounded.

“I started doing it because I enjoyed it, so I was like, maybe I started treating it too much like a job and maybe I need to start back having fun like when I first figured out I could rap,” she concluded. “It was so fun to me! It’s still fun to me but now it’s like, it’s fun but I get nervous for drops. I get nervous worrying whether people are going to like something versus just doing it for me. So you just gotta stay grounded and you gotta stay believing in yourself because no matter what. You gotta make people believers because nobody gon’ have your back like you.”

Stream Ken The Man’s 4 Da 304s above and follow her on Instagram @imkentheman for more of her impact.