Atlanta, GA – With the city of Atlanta being the center of the Hip Hop universe these days, the door for new rappers to enter through is wide open. New talent emerges on the regular and with that comes rappers of all sorts. Ola Runt, the latest product from Zone 6, could be the next big star to shine in the ATL.

Ola’s brand of music is unconventional and may have you questioning why you’re listening to him in the first place. There’s no telling where any of his songs will go thanks to his unconventional flow and the various vocal ranges he uses that are scattered all over the booming production. Even though you hear him battling the beat, his hard-as-nails rhymes and raw approach to his music is intriguing. Think of Young Thug on his debut mixtape 1017 Thug to guess what type of sound Ola has.

Ola’s journey into Hip Hop began when he was a kid listening to all the artists his father would play whenever he got to spend time with him. His connection to his father played an integral part in him becoming a rapper. If it weren’t for his father, Ola might have been in jail, or even worse dead.

“I really just salute him for being in my life and really showing me what’s going on,” Ola said about his father having a presence in his life. “I’m just thankful for the shit that he showed me because I’ve been shown a lot and had to learn.”

Trouble always followed Ola and after a stint in prison, his father built a studio in one of his car lots to keep his son from falling into the same trap again. Inside the studio, Ola tapped into a new zone as he worked on his craft day in and day out. When his friends and local neighborhood gave him positive feedback on tracks like “Brazy Story” Remix, “Monkey Bars” and the original version of “Feel Like Guwop,” Ola knew he had a future as a rapper.

In March, Ola dropped his debut EP Mama Tried and got co-signs from Lil Baby, 21 Savage, Meek Mill and Southside. Gucci Mane took notice of the new rapper and took him in as one of the new members of Guwop’s collective The New 1017. Two months after that, Ola released his latest mixtape, Beggin For A Body, which Gucci executive produced and is featured on the remix to “Feel Like Guwop.”

Ola’s star continues to grow and he feels it’s his time to be the next one up out of Atlanta. “Shit man, 2020, man, this is my year, man,” said Ola. “We ain’t playing with nobody, I ain’t nobody you want to play with. Shout out to everybody that’s worked with me since day one. Everybody who been on the record from the start, this is my year.”

According to Ola, Atlanta Hip Hop is all fake and he thinks he’s going to be the one to bring the real back. Just take a look at the newly released visuals for “Trap Cap” to see how he feels about Hip Hop’s current state.

HipHopDX spoke more with Ola Runt about his journey, how he explored rap in juvenile detention, his father building a studio for him to focus, his favorite artists, hearing his music overseas and more.

HipHopDX: What was growing up in Atlanta like for you?

Ola Runt: I grew up in the east side of Atlanta, like Zone 6 area. I was treated basically like, I was back and forth between staying with my mom and my dad and I just got a lot from both of them, you know what I’m saying? I learned from both of them and they never really hid shit from me. I was always just curious, you know what I’m saying? About the streets, curious about the streets and how to get some money. And once I got of age, got there, I started trying to get my own money, just started trying to be my own boss.

HipHopDX: Speaking of your parents you have a strong relationship with your father. What was his impact on you?

Ola Runt: It meant everything that it could having that relationship with him. He really like shut down his car business and he had a car lot. I had just got out of prison at the time and he seen I was really back on the same stuff that they sent me to prison and he didn’t want me to go back down that route. So he shut down his whole business and made it a studio for me because I told him that what I wanted to do.

It was something different, you know what I’m saying? I had to put in the work and put in all that in that studio. It kept me out of trouble. When I got the studio I ain’t get in trouble, no more trouble. Until my recent trouble. Having that relationship with a father like that is very important. I salute him for that and I’m just thankful for the shit that he showed me. A lot of shit I experienced on my own and I still experience on my own but I’m thankful for him.

HipHopDX: I know you didn’t start rapping until you were older so what plans did you have set out for yourself when you were younger?

Ola Runt: Yeah I ain’t never used to rap back in my childhood. I ain’t never know I’d be rapping right now. I thought I’d be playing a sport or something. I played football and wrestled. I only rapped when I used to get in trouble. When I got in trouble I used to go to juvenile detention when I was a kid. I rapped because people in the dorm that’s what they did. They passed their time with that and I saw them doing it and I got a piece of paper and tried to come up with my own stuff. I never really just got out of jail and went to a studio.

HipHopDX: When did you really know you wanted to become a rapper?

Ola Runt: When I was doing five years in prison. I just decided to do it and the feedback that I was getting from all of my bros, shit they were just telling me to go out and rap for real. By the time I got out of prison, I was just telling everybody I was going to rap. I was already shooting videos and I started really doing this shit. I ain’t really care how I look and I ain’t give a fuck if I had money or not, I didn’t give a fuck.

OG look at dis shit nigga we in SPAIN, BARCELONA wit this shit ‼️‼️💚❤️ shoutout @645ar & all my supporters 2020 I won’t let you down. #frontstreet #ripgranma #happybirthday 📿📿📿

HipHopDX: You’re on a solid start so far. You recently went to Spain and heard your music being played over there. What was that like?

HipHopDX: You have a very different style of music. How did you develop your style?

Ola Runt: Yeah, I do my own thing. I always make my own way. I just make my own way and I come up with my own. I do my shit different than other people. I just try to just be different. I go in the studio and I’m not writing any music. Since I been out I ain’t write not one song. Every song that I put out, every song that I got out is straight freestyle so it just be organic, it be natural. That’s the only way I can explain it.

HipHopDX: Hearing your style of music and hearing how out of the box it is, there’s a lot of people online who say you sound like an early Young Thug. You two already share a lot of similarities. How do you feel about that comparison?

Ola Runt: Shit, I fuck with that comparison. Thug is an icon in this music and where I’m from Thug big as fuck. So people can say I sound like Young Thug and I’m going to say Young Thug big as fuck. I don’t give a fuck what they say. That’s a big comparison. And that tells me I know my voice. I can play with my voice and make that muthafucker sound how I want it to sound.

HipHopDX: You’ve developed quite a friendship with Gucci Mane. What’s the best advice he’s given you?

Ola Runt: Shit, advice? He just told me that now basically don’t get down. Don’t go down the same path that he did type shit. With keeping in trouble and shit like, basically. He really cares about me being out here in the street, you know what I’m saying? He want me to stay free type shit, that way basically like I was in. He got deep with me about it and he told me I can go far in this industry if I stay out of the bullshit.

HipHopDX: How would you describe your growth between your two projects Mama Tried and Beggin For A Body?

Ola Runt: With Mama Tried I had no features. Beggin For A Body I had 4 features and that’s a lot of features. I got Gucci Mane on that muthafucker, Nefew, Trouble and Young Scooter. I got them to get on my second tape because my fans really wanted to hear me rap with people. On Mama Tried I wanted to show I really can do this shit without doing features. I be seeing people coming out with features and shit and that’s how they expecting them to be.

I just came out different and wanted to show my city what’s going on. How I pop my shit, I just pop my shit on that one. Then I came back with Beggin For A Body with the features and shit and I’m just really letting folk know I’m begging for a body type shit. Gucci Mane gave me that name, Gucci Mane named that tape. He named it Beggin For A Body. 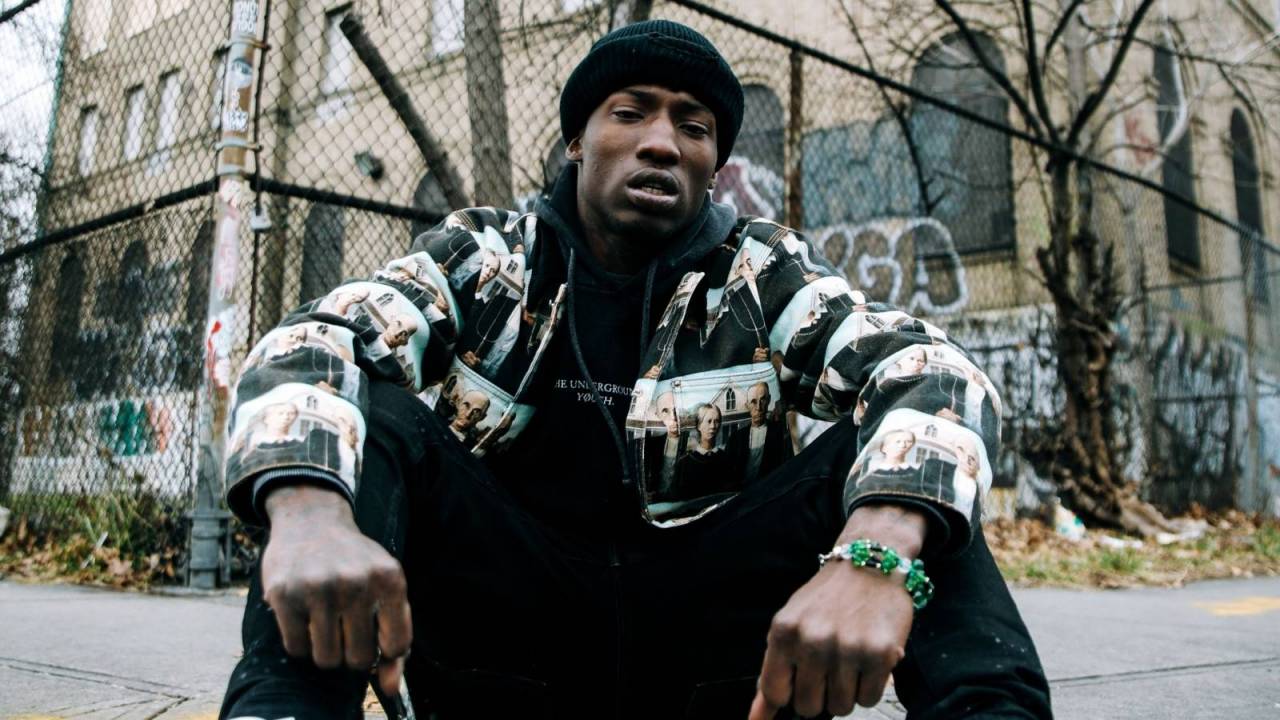 Ola Runt Is Not Signed To Gucci Mane’s 1017 Records

HipHopDX: With two projects out, I’m sure you have another coming out in the future. What are you doing to make sure you’re evolving between these projects?

Ola Runt: I’m just working. I’m working on myself. I’m staying up to record 6 or 7 songs a day. So I’m really completing projects in two days. That what I’m doing, I just focus on just knocking out projects. I got 15 projects and all of them are ready.

HipHopDX: What kind of legacy are you trying to leave before you retire from the rap game?

Ola Runt: I’m trying to just be that young nigga who just shows that anything is possible, you know what I’m saying? I’m showing that the underdog can win too. I just want to be like one of those legendary artists that had an impact. I just want to make them folks see and be like damn. I just want to be big, Michael Jackson like that shit. I really just want to see how far the music takes me. I’m going to keep doing it as long as I can.

Checkout more Ola Runt content here and here. His latest mixtape, Beggin For A Body can be streamed below.