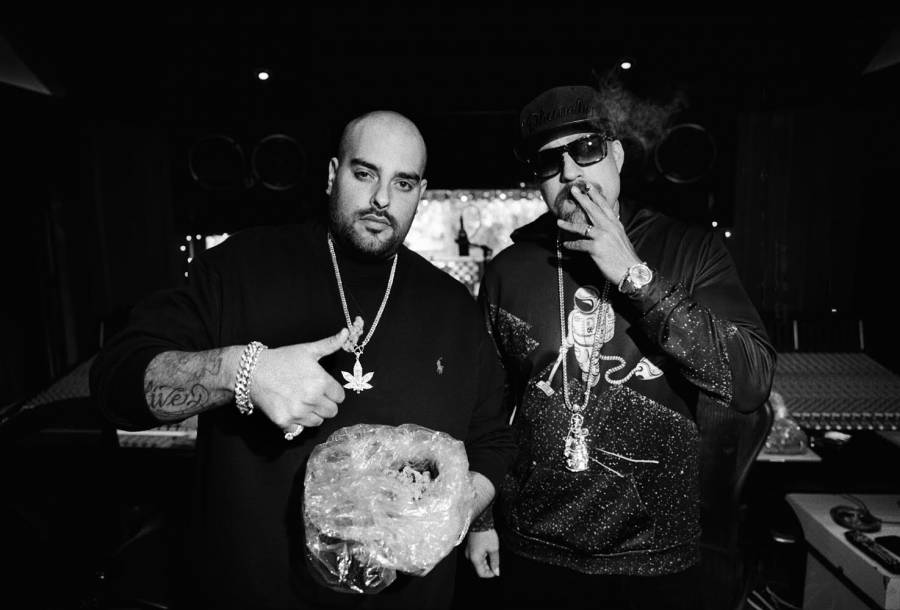 New York, NY – B-Real is a man that, quite simply, needs no introduction. His resumé reads like a who’s who of Hip Hop’s finest moments: Cypress Hill, the rap supergroup Prophets of Rage, and production work for everyone from the late Proof of D12 to the WWE are just a few of his many career highlights. He’s also considered one of the forefathers of stoner rap, which is why it makes sense that he would not only work with fellow 420-friendly rappers (Snoop Dogg), but he would — most recently — partner up with Berner, one of the hottest indie rap stars today.

Over the course of two hours with HipHopDX, we had a chance to talk to him about his upcoming projects, the changing nature of the cannabis industry, and much, much more. As can be expected from a man of his stature, B-Real (real name: Louis Freese) dropped countless gems, and all but gave us a true master class in Hip Hop history, cannabis culture, and the unique challenges of being LatinX in Hip Hop during Cypress Hill’s initial rise to stardom.

And so, without further ado, here are some of the finest gems mined from our recent conversation with B-Real.

HipHopDX: How did you and Berner first link up?
B-Real: Many years ago, I used to hang out at the Rainbow Bar and Grill in Los Angeles. It was a legendary rock spot where all the people in rock music, metalheads, classic rock legends and stuff like that used to hang. So he [Berner] came up there, he met me and he gave me his demos. He had come up there a number of times, but we didn’t really get introduced properly to hang. We got introduced by way of our mutual friends saying, “Oh yeah, we might be working together.” But that was as far as that went.

Some years later, after I’d started BReal TV, we had booked the interview with Wiz Khalifa and he brought Berner and Chevy Woods down with them. And in our conversation there, he was plugging their upcoming projects. And I said, “Oh well, they got to come up when they’re going to be releasing their project.”

After we hung out a couple of times, we got along really well. We had some chemistry in terms of the way we clicked. One of the conversations I had with them after meeting them with Wiz, he hit me up and he says, “Hey man, would you be into doing a collaboration? Like doing a record with me?” And I’m like, “Yeah, let’s do it.”

HipHopDX: Let’s talk about the changing nature of the cannabis industry. Obviously, when Cypress Hill was at its peak, the “cannabis conversation” was very different than it is today. Legalization is no longer a taboo or revolutionary concept, and cannabis-derived products seem to be everywhere. As someone who is considered one of the modern pioneers of the cannabis movement, how do you feel about that?
B-Real: The conversation shifted in terms of cannabis in the sense that cannabis people can come out of the underground and become legitimate business people. Some were very reluctant and some are still reluctant, so I believe that’s why the black market will always exist because there will always be some reluctance from those involved in the cannabis industry.

The goal was always to push forth legalization and whatever businesses that sprouts or sprung from that. No pun intended, of course, because Dr. Greenthumb is a vertical company — all independent, but vertical — and so the goal was always to try to get in the so-called “white market,” or the legal market. There were a lot of bumps in the road, obviously, in creating the brand and then eventually getting the brand and coming into not just creating products, but having a retail store. The bumps and bruises that we took trying to do that allowed us to be more educated about the business and what we needed to do to come all the way in and be one of these legitimate companies. And it’s not easy. It’s definitely not easy. It takes a lot. But the brand building is the most important.

As difficult as it was, we were able to create a brand that people know and people love and trust and they go out of their way for us. So, we’ve been fortunate. Others not so much, but I think the industry is definitely going to flourish even more so than it is now. Especially once all this craziness is over.

Another Kush conversation courtesy of @brealtv full episode at www.youtube.com/brealtv

HipHopDX: Let’s talk about the time Cypress Hill opened up for De La Soul. That was a defining tour for you all, and I’m wondering if you can speak to the experience?
We were big fans of De La Soul — they are good friends to this day, and we thank them because us doing those shows with them came at a pivotal time in our careers. This is when we were on the rise — and a lot of bands, when they see somebody coming up like the way we were, they get threatened and they don’t necessarily want anything to do with us because they don’t want to have a hand in helping us possibly going further than them, taking any steam away or taking any shine or whatever.

They could have totally said, “No, hell no, we’re not bringing them.” But they embraced us. Groups like Naughty By Nature, groups like De La Soul, groups like the Beastie Boys — they were pivotal in introducing us to two worlds. So we’ll always love and appreciate De La Soul.

HipHopDX: Now, let’s talk about the current “Latin explosion” in Hip Hop — specifically with artists like J. Balvin and Bad Bunny. They’re recording whole Hip Hop songs in Spanish, that are making the charts — something that was unheard of even ten years ago. As a Latino artist, I’m wondering what your thoughts are on this latest trend?
B-Real: I think it’s great. In this time, you are hearing so many dope artists out there rapping in Spanish and doing a combination of English and Spanish but primarily Spanish — the producers and the rappers and the singers are just stepping it up, and I love to hear that.

Mellow Man Ace and Kid Frost opened the doors for Latino kids that were Chicanos and Nuyoricans and Latin kids that grew up in America, right? But there was really no, outside of America, no Hip Hop fan base yet in Latin America or even Mexico. So, if they had labeled us a Latin group and tried to market as towards those markets, we would have fallen flat on our ass.

Los Meros is out now. Stream it below.