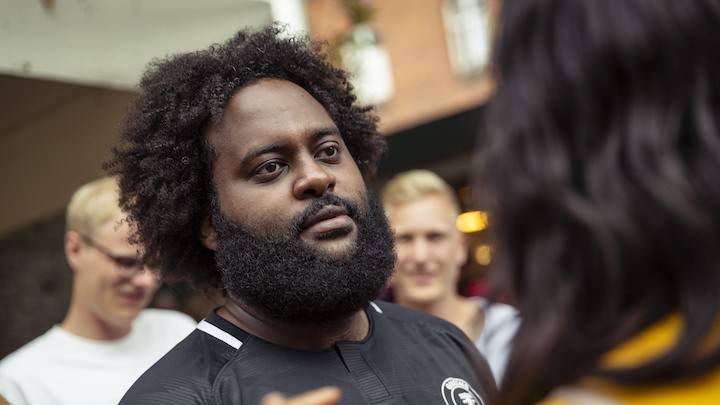 When it comes to ATV riding, J. Cole suggests Bas wouldn’t be in the same class as Meek Mill or Lil Uzi Vert.

In a video shared on social media on Sunday (August 23), the “Night Job” rapper can be seen riding an ATV into a compound in Los Angeles and just as the gate opens, he slammed on the gas and accidentally rammed into a pole.

“Went on twitch last night t share new music and new failures,” he captioned on Instagram. “Can we talk about my agility on that landing tho? It must be the Dreamers. Thanks @realcoleworld . Twitch.tv/bas @twitch”

It didn’t take long for Cole to call out Bas’ “talent” on the ATV in the comments.

“dawgggggg. Chilllll. Meek mill and uzi gone be disgusted when they see this,” Cole wrote. “That landing graceful tho”

Bas replied, “@realcoleworld I know bro all the bikers on road were showing me mad love too had me gassed, I thought I was gang.”

Hip Hop and all-terrain vehicles are no strangers to one another. From their prominence in DMX’s “Ruff Ryders Anthem” video to Baby Pluto and Meek busting them out whenever they feel, the vehicles represent another slice of freedom in the streets.

2020 has been kinder to Bas when it comes to traveling on two feet as opposed to four wheels. The Dreamville member got to celebrate with his team In July in honor of a brand-new documentary surrounding 2019’s Revenge Of The Dreamers III. Th 65-artist-strong project debuted at No. 1 on the Billboard 200 and earned a Grammy nomination for Best Rap Album at the 2020 Grammy Awards.

HipHopDX also ranked the project in the Top 3 of The Best Rap & Hip Hop Albums Of 2019, highlighting the strength of the “all-star roster.”

Bas also launched a Twitch channel and partnering with Jameson for The Stay Inn, a series where he teamed with musicians across the globe to encourage staying inside during the pandemic and creating. One of the songs that emerged from the sessions turned into “Jollof Rice (Say3 Remix),” with Houston-based producer Say3 and EarthGang.

Thanks to @jameson_US for making it happen! It’s been inspiring to link with various creatives from across the world from the confines of our homes. @say3beats Jollof Rice remix is streaming everywhere 🥛 is streamed. #JamesonConnectsBas #JamesonStayInn #JamesonPartner @say3beats @earthgang @dreamville