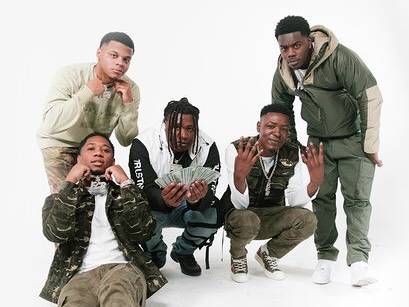 Memphis, TN – When it comes to creating a sound, Grammy-nominated super-producer, Tay Keith, is highly sought after. The Memphis producer built his name up producing for Blocboy JB, and has since then gone on to devise renowned beats for Beyoncé, Drake, Travis Scott, Eminem and more.

Pulling back to his Memphis roots, Tay Keith is now introducing the world to his longtime friends and artists, Fast Cash Boyz, with their debut project Fuck The Cash Up. The first single “Bad Habits” from the 12-track project is co-produced by Murda Beatz, as the entire project is executively produced by Tay Keith himself.

HipHopDX caught up with Tay Keith and Fast Cash Boyz for an online interview, hence social distancing, to discuss the process behind their debut project and single. They discussed how they have stayed inspired while quarantining, and also what we can expect from the upcoming group as Tay Keith backs them.

HipHopDX: Your debut project Fuck The Cash Up is in collaboration with Fast Cash Boyz, people you have known for years, how did you decide to create this project with them?

Tay Keith: It started off when we were in Memphis growing up. I was like in 12th grade when I started working with them and it lead to us building a relationship. As I started progressing I just kept my relationship strong with them. It got to this point where it’s like, “All right, we going to make this happen now, we’re going to make shit shake.”

HipHopDX: What was it like in the studio recording with everybody and just getting everybody together to make this happen?

Tay Keith: It was good vibes, I’d say. It was never on no negativity or hate shit. It was all fun and games and bullshitting in the studio … just good energy and good vibes. I feel like that’s what made the process so smooth because we didn’t spend so much time actually recording. I would cook up a beat and play it and they would get right in there and make the chorus. It wasn’t no spending hours trying to come up with the chorus or write shit. It was straight authentic.

Tay Keith: Basically, a lot of people don’t know when I first started producing, they helped mold my sound when making the shit I was making. The shit that I did back in the day, the music I did back in the day … it was kind of like, making songs with them put my shit in a certain direction where I just kind of ran with it.  I already knew what direction to go with when it came to this project.

HipHopDX: The debut single is “Bad Habits” and it was co-produced by Murda Beatz. What’s your relationship with Murda Beatz? How did you team up with him?

Tay Keith: Murda, that’s my brother. Everybody in the industry works with certain people and got certain relationships with certain people. Me and Murda, we got a certain loyalty for each other. We cooked up the beat and when it came down to handling the business on it, he was all for it. He looked out for me. Me and Murda, we just got that understanding with each other.

HipHopDX: Where did the title “Bad Habits” come from? Do you all have some bad habits?

Money: Just by turning up.

TP Stackz: We are going to keep it in their face.

C-Money: All the way. We just going to really keep the ground turned.

Tay Keith: I feel like most importantly just showing personality and shit like that. Showing what everybody is about. Even with the times like this, when everybody is stuck in the house, this is the time when muthafuckas tune in the most.

HipHopDX: On Instagram there has been something called demon time, people are having virtual parties, TikTok challenges are flourishing, and there are Instagram battles happening. How have you all been staying inspired during your quarantine? What have you been doing to get through?

What question Do y’all think made us look like this 🤔

Jizzle: In the studio.

C-Money: Really locking ourselves in the studio. Just kicking it.

HipHopDX: What about you Tay Keith, are you thinking about getting in on one of these Instagram battles?

HipHopDX: How do you all plan to roll out the project and the single? Are there any music videos dropping?

Tay Keith: The first rollout was the “Bad Habit” single and after that there’s going to be some videos.

HipHopDX: Tay Keith, can you speak to me a little about the importance of being at the top and bringing up people that you believe in?

Tay Keith: Yeah, that’s real important. If you want to be a successful rap artist, you got to have your own city behind you. Just for me like working and coming up with BlocBoy JB, Key Glock, Fast Cash Boyz and different artists in Memphis who are coming up right now. Just keeping the relationship strong with them knowing that I still got respect for my city. That’s a big thing. I feel like a lot of producers who come up, they probably won’t even have that respect out of their own city. I feel like I got a point to prove and I am big on respect.

HipHopDX: What else can we look forward to from you guys, Fast Cash Boyz, as well as you, Tay Keith? What’s next for all of you all?

Jizzle: You can look forward to seeing us a whole lot and a whole lot of music from Fast Cash Boyz. “Bad Habits” single is out right now.

C-Money: Looking out for FTCU, it’s on the way. It’s coming out real soon. Get familiar because we are just getting started.

Fuck The Cash Up is set to release sometime in May. In the meantime check out the cover art below and listen to the debut single “Bad Habits” streaming now.