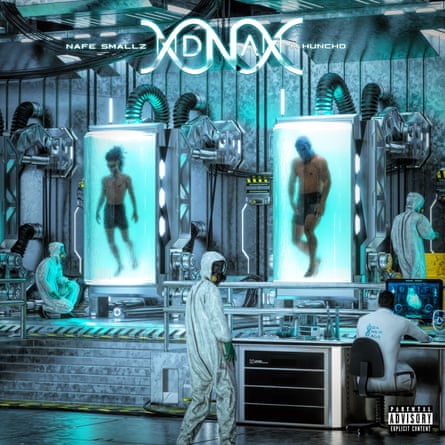 M Huncho and Nafe Smallz are cut from the same cloth, the artists have been gliding through the UK charts over the past couple of years. Both at the forefront of the trap wave genre in the UK; a mixture of melodic rap, 808 beats and gritty stories from their lifestyles. After releasing solo projects, the duo have teamed up for a project together named ‘DNA’ (Da New Age).

With their recent come-ups, ‘DNA’ shows the rappers at their most confident. Neither are afraid to brag about their progress. Success is the main theme running throughout, pitfalls included. On ‘Flooded’ Nafe Smallz struggles with the jealousy fame brings, explaining “everything changes / they say they love you / but you know it’s fake”.

Throughout the record Huncho and Smallz bounce off each other, back-to-back with their melodic flows almost as if they’re in competition. This comes out best on their standout track ‘Louis Vuitton / Lost Hope’. Quincy Tellem, a constant collaborator with Huncho provides the beat which includes a switch up inbetween that picks up the pace of the track. Both artists up their game, but it’s missed on other parts of the album.

With the two rappers having success in the UK, their lifestyles have now changed making for more of a reflective record. On ‘5AM’, Huncho states “Made it from the dirt, you can’t apprehend, you cannot relate”. Huncho and Nafe are in much more comfortable places in their lives from the struggles they had previously. At times this translates through to the music, the risks and hunger shown on previous records is only heard on rare occasions.

With the cloudy production and heavily auto-tuned vocals, the duo created a hazy induced mood. The melodic rap theme is furthered with the features included. Coming from Young Adz and Yxng Bane, both fitting as they’re two others who can float between rap and singing in the UK scene.

The duo work well together, but the lyrics are predictable and it lacks a level of substance in other areas. Overall, the record is fine, but is that all the duo want? As single artists they have made it far by standing out, sonically sounding different – and ‘DNA’ doesn’t hit the heights we are used to as solo artists.