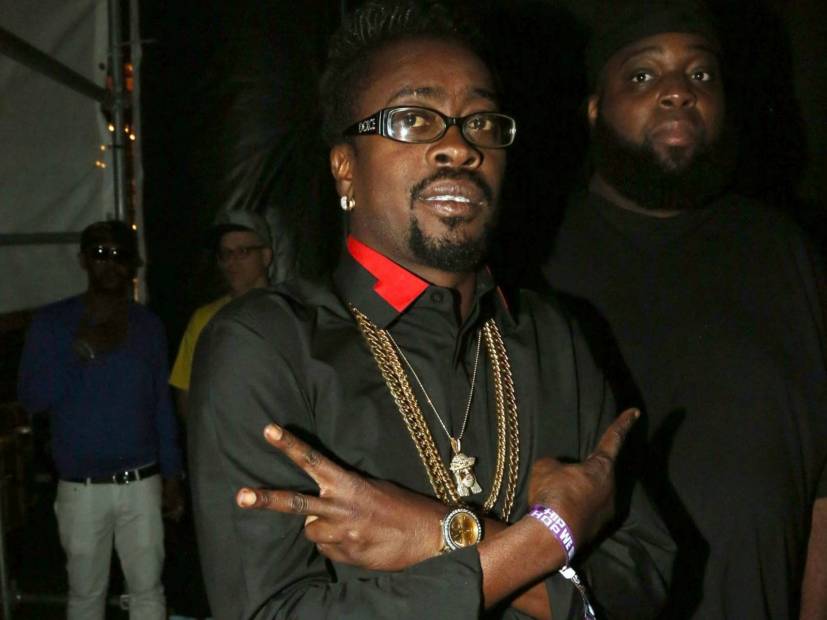 The Beenie Man and Bounty Killer Verzuz battle got underway on Saturday (May 23). While nearly 700,000 viewers tuned in to watch the two Jamaican dancehall artists — who were actually in the same place unlike past Verzuz battles —  they had a few unexpected guests.

Not long after the event kicked off, at least one policeman showed up at their location and wanted to shut them down.

But rather than let the officer rattle him, Beenie Man politely asked him in his thick Jamaican accent, “Can we not do this right now? There are 500,000 people watching us right now from all over the world. Do you want to be that guy? Do you want to be that guy? Listen. People. The police are here. But we are not stopping because before COVID-19, it was murders killing people.

“It was people killing people then COVID-19 started … so we do this. Hey stop…Killer. Them gone out that door. The police are gone. We got rid of them. We are Jamaicans. We are being nice. We are being good. Don’t make me stop the fight! So people, let’s do this!”

The police showed up at the Beenie vs Bounty Killer #Verzuz and look at how Beenie handled the situation. This is the most Jamaican shit I’ve seen all day 😂 pic.twitter.com/QRUFEyycKi

Rihanna, who hails from the nearby Caribbean island of Barbados, wrote in the comment section, “Police go home.” Evidently, they did.

Erykah Badu Vs. Jill Scott Instagram Live Battle Wasn’t A Battle At All

Twitter was also delighted with the way Beenie Man handled the situation, with one Twitter user saying, “This is the most Jamaican shit I’ve seen all day.” Others noticed Bounty Killer seemed to vanish into thin air as soon as the police showed up.

Check out some the reactions below.

The way Beenie Man was talking to the police pic.twitter.com/M3U8JcovSu

Police deadass pulled up to the Bounty Killer and Beenie Man Verzuz battle. Bounty must’ve had mad warrants out for him cause he was goneeee lmaoo. Legendary battle tho. pic.twitter.com/JPOjQUv6oA

Jamaicans are a whole different vibe.🇯🇲

The police show up during the live #VERZUZ and Beenie Man handles it like a Boss. 😂😂 pic.twitter.com/Dwme6zO0VT

Beenie Man when the police showed up #VERZUZ pic.twitter.com/0edeiUzKTk

We just witnessed Beenie Man and Bounty Killer get the police outta there & kept the show going without breaking a sweat. These legends win everything. #VERZUZ pic.twitter.com/27y9hz9FPR

#VERZUZ Real talk tho… the hardest part of this battle was Beenie Man running out the police!!! "you don't wanna be that guy … we worldwide! we not stoppingggg" straight fireee!!! LOL … "I was like WTH nahh sir!! Run dem Beenie!!!!!" 🤣 He was cross CROSS #ForTheCulture

Beenie man face when the other service provider sent the police to shut down the #VERZUZ Live 😂😂🤣🤣🤣🤣🤣🤣 pic.twitter.com/lWQNQv2uzp

The police showed up and Beenie Man was smooth with it. Bounty Killer stepped out the frame so quick. He ain’t going back to jail. #verzuztv

Jamaican Cops: “This is the police! We have you surrounded! Come out now!”

Beenie Man: We are Jamaicans we are being nice you dont want us to start a fight
Police :😖😖😖😖😖 #VERZUZ pic.twitter.com/XvTTSaajga

Beenie Man to the Police pic.twitter.com/PwziRojQhh