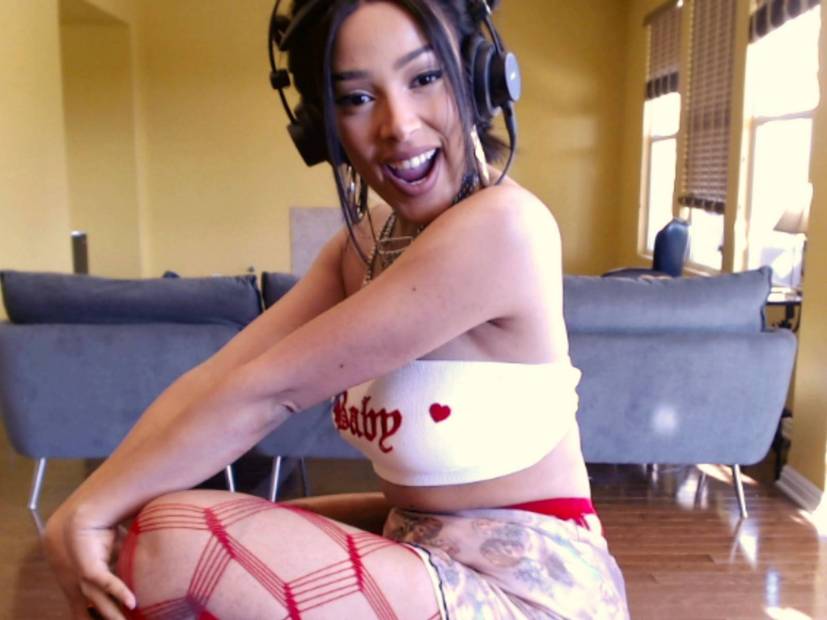 Doja Cat became a trending Twitter topic on Friday evening (May 22) after an old video of herself allegedly laughing at racist jokes in an incel chatroom resurfaced online. [Editor’s Note: An incel is short for “involuntary celibate.” They’re members of an online subculture who define themselves as unable to find a romantic or sexual partner despite desiring one.]

The video dropped just a day after she was named in Lana Del Rey’s controversial Instagram rant about double standards in the music industry.

However, the number of accusations flying around make it difficult to discern exactly where the #dojacatisoverparty hashtag began. Some people claim she said she would never want to be black, while others are saying she was stripping online for racist white men.

One Twitter user shared several screenshots that reveal a detailed conversation about the situation. The “Say So” artist is accused of “forcing herself to vomit, taking a crap on camera, showing herself naked and everything horrible.”

She’s also accused of undergoing numerous plastic surgeries, having “a thing for white guys” and consistently hanging out in racist websites.

For those who want info on the doja cat situation #dojacatisoverparty pic.twitter.com/oC5l4wcE9x

Whatever the case, Twitter isn’t showing Doja any mercy — even with her “Say So (Remix)” with Nicki Minaj recently going No. 1 on the Billboard Hot 100.

Several people are connecting Doja’s current predicament to the Del Rey fiasco. During the singer-songwriter’s diatribe, she used several black women in the music industry in an attempt to prove a point and, consequently, she was dragged online.

“Question for the culture,” she began. “Now that Doja Cat, Ariana [Grande], Camila [Cabello], Cardi B, Kehlani, and Nicki Minaj and Beyoncé have had number ones with songs about being sexy, wearing no clothes, fucking, cheating etc — can I please go back to singing about being embodied, feeling beautiful by being in love even if the relationship is not perfect, or dancing for money — or whatever I want without being crucified or saying I’m glamorizing abuse???

lana after getting cancelled literally yesterday by doja stans and now doja is cancelled #dojacatisoverparty 💔 pic.twitter.com/me7kSzVGGz

Check out more of the reactions below.

#dojacatisoverparty here’s what happened:
Doja Cat is being accused of being part of a white supremacist group chat in which she was allegedly racist herself

Lana Del Rey and Doja Cat getting exposed for being racist within 24 hours #dojacatisoverparty pic.twitter.com/k9D47lUIoj

We spent half of the day yesterday defending Doja Cat from Lana’s racist antics, only to wake up the next day and discover that Doja is even more racist than Lana #dojacatisoverparty pic.twitter.com/194NSLzkhn

Doja Cat on Tinychat when they call her the n-word pic.twitter.com/vO14oCyypW

Doja cat whenever one of her incel friends call her a nigger pic.twitter.com/t82iU7P1gy

Lana stans digging up old shit from doja cat past just so they can ruin her career just like what doja cat stans did to lana: pic.twitter.com/ABQfiKgJfJ

Ariana on her way to delete the song she made with doja #dojacatisoverparty pic.twitter.com/yeMgjJYtSk

lana del ray and her fandom doing a ritual so doja cat would get cancelled literally the DAY AFTER HER #dojacatisoverparty pic.twitter.com/CAcPlOIaAm

lana del rey and doja cat after getting cancelled a day within each other #dojacatisoverparty pic.twitter.com/USJts6D5rN

Doja Cat in that chat with all those incels pic.twitter.com/2xo6apBZ3x

Doja Cat was sitting up in the Tinychat group chats like this pic.twitter.com/eLN2u2L7FN

oml just found out Doja Cat used to strip for white racist incels on tinychat,, sis we were all rooting for you eye- #DojaCatisoverparty
pic.twitter.com/PhPdLF1BcR