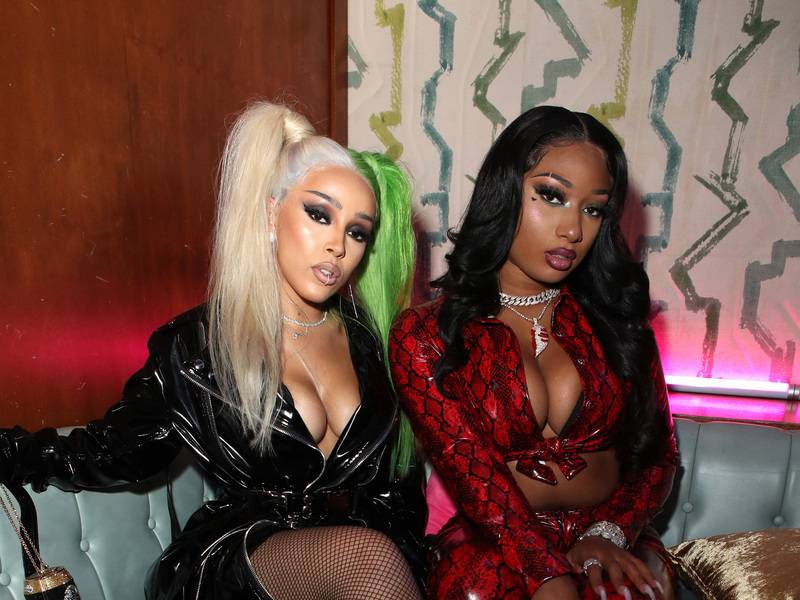 Doja Cat and Nicki Minaj’s “Say So (Remix)” is officially the first No. 1 song of both women’s careers. The two managed to stave off competition from Megan Thee Stallion’s “Savage (Remix)” featuring Beyoncé to secure the top spot on the Billboard Hot 100 dated May 16.

In the process, Nicki broke the record for a Hot 100-charting artist’s longest wait for a No. 1 song. Reaching the top with her 109th entry smashed Billboard’s previous standard set by Justin Bieber, who hit No. 1 on his 47th entry.

The ascent of “Say So,” which was No. 6 on the previous Hot 100, was largely thanks to its remix. The Nicki-assisted version dropped on May 1 and sparked more interest in Doja’s track.

Can’t thank you guys enough for going so hard this past week to help us make history. I saw it all. 🥺 You’ll never understand how much you uplift me with the overwhelming love & support you continue to show. I love you so much. Like so much. So much. 🎈Dear @dojacat, thanks for trusting me with your baby. Hope I lived up to your expectations. You’re so extremely talented & so deserving of this moment. 🎀🎀🎀🎀🎀 what time r u showing ur boobs? Love, Nic 🦄🦄🦄🦄🦄🥴 #SaySoRemix

“Say So” experienced a 966 percent increase in sales for the week ending on May 7, according to Nielsen Music/MRC Data. The song sold 66,000 downloads, making it the week’s best-selling track. It also had an 87 percent spike in terms of streaming, racking up 30.3 million U.S. streams.

Doja’s hit single received a more modest uptick in radio airplay with a six percent increase, earning 96.2 million audience impressions for the week ending on May 10 (airplay is monitored from Monday to Sunday). According to Billboard, most of the radio play still came from the original version of the song during this time period.

For Megan, her Beyoncé-assisted “Savage” jumped from No. 4 to No. 2 on the latest Hot 100. Although the anthem was surpassed by “Say So” in Billboard’s overall tally, the Hot Girl Meg and Queen Bey collaboration reached No. 1 on the Streaming Songs chart.

The cut pulled in 42.1 million U.S. streams (a 53 percent increase) in its first full week. The addition of Beyoncé previously helped “Savage” go from No. 14 to No. 4 on the Hot 100 following its April 29 release. The remix pushed Megan’s hit back into the Top 5 despite only two days of activity being counted for the chart dated May 9.

On May 5, Doja claimed she would show her boobs “real hard” to fans if “Say So” made it to No. 1 on the Hot 100. After Billboard revealed her single topped the chart, she admitted she “played” fans during an Instagram livestream on Monday (May 11).

“I’m just gonna be honest with you guys,” she said. “I did play you. I’m not showing my boobs real hard, man.”

HOTTIES WE JUST HIT NUMBER 2 ON THE HOT 100🔥🔥🔥 🐝🐎 we’ve come so far 😭😭😭 I promise to keep working hard and getting better everytime ! Thank y’all for growing with me 💕💕💕💕 look at all this girl power !