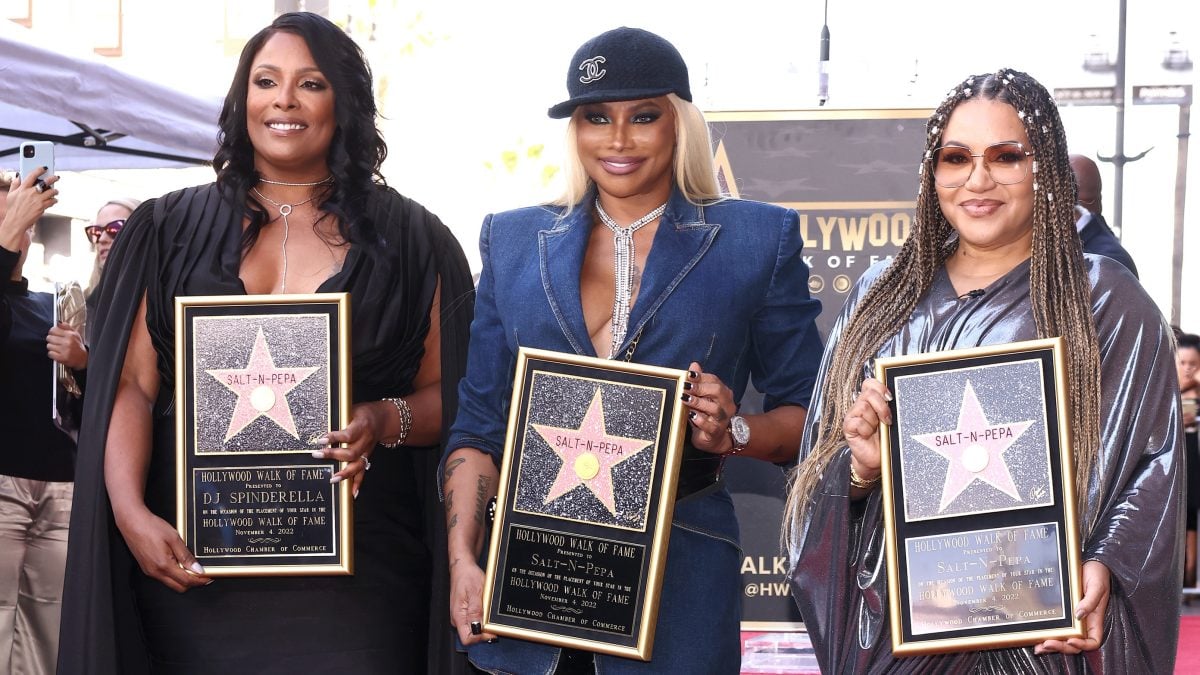 Salt-N-Pepa reunited with DJ Spinderella this week to celebrate the group receiving a star on the Hollywood Walk of Fame.

The legendary group comprised of Cheryl “Salt” James, Sandra “Pepa” Denton, and Deidra “DJ Spinderella” Roper got back together on Friday (November 4) to receive their flowers for the grand occasion. The reunion marked the first public appearance by all three members since 2019.

Addressing the crowd, Spinderella spoke about the highs and lows that the group experienced since they arrived on the Hip Hop scene back in the ’80s. “Thank you Salt and Pep for mentoring me,” she said (via E! News). “We been through it, ups and downs, life lessons.”

She added: “It wasn’t just the music, it was our relationship and that means everything to me so whatever we got to do to fix that, let’s get some unity back in this! Let’s figure it out and be iconic and be what the fans want.”

Both Salt and Pepa expressed their immense gratitude for the honor as they reflected on their trailblazing legacy in Hip Hop.

“Keep the faith,” Salt said to the crowd. “Your setback is a setup for your comeback!” said Salt. “Everything you’re experiencing and learning along the way is preparing you for what you asked for, for what you prayed for… keep your head up and keep on pushing it ladies!”

Pepa added that she’d “never thought” that the group would receive a star on the Hollywood Walk of Fame.

“Look at that? Hip Hop has lasted for the women!” Denton said. “We gotta keep empowering each other, lifting each other up, pass the torch, this is our time as well, and goes to show you that Salt-N-Pepa got a stamp in the earth.”

We go together like Salt~N~Pepa & Spinderella, now on Hollywood Walk of Fame Forever ⭐️❤️. Thank you so much for all the love everyone ! pic.twitter.com/1w1RR8htKe

After decades of success, DJ Spinderella claimed that she was fired from the group just before they were set to tour with New Kids on the Block. Shortly thereafter, Spinderella filed a lawsuit against Salt and Pepa for unpaid royalties, multiple breaches of contract, and fraud.

“Despite my participation in promoting the tour and being highly publicized as one of the acts, in January 2019 I received a ‘termination’ email from #SaltnPepa excluding me from performances with the group,’ she wrote on Instagram at the time.

Eventually, the case was dismissed with prejudice which means that Spinderella cannot refile her claims from December 2019, according to court documents.

In February 2021, Spinderella told Billboard: “The relationship is over. The only way something like that would happen is if we get this business handled and they offer an apology to me.”

“When you have a legacy, you want to make sure that would outweigh this stuff,” she continued. “So I’m not, you know, I’m not closed off to that, but I will be respected. I will be treated fairly. … I will never be in a group that does not want to be with me.”

Salt-N-Pepa made history as the first female rap act to win a Grammy Award in 1995 when their hit “None of Your Business” won for Best Rap Performance by a Duo or Group.

In total, the iconic group charted eight Top 40 singles on the Billboard 100 and sold over 15 million records worldwide making them one of the bestselling rap acts of all time.