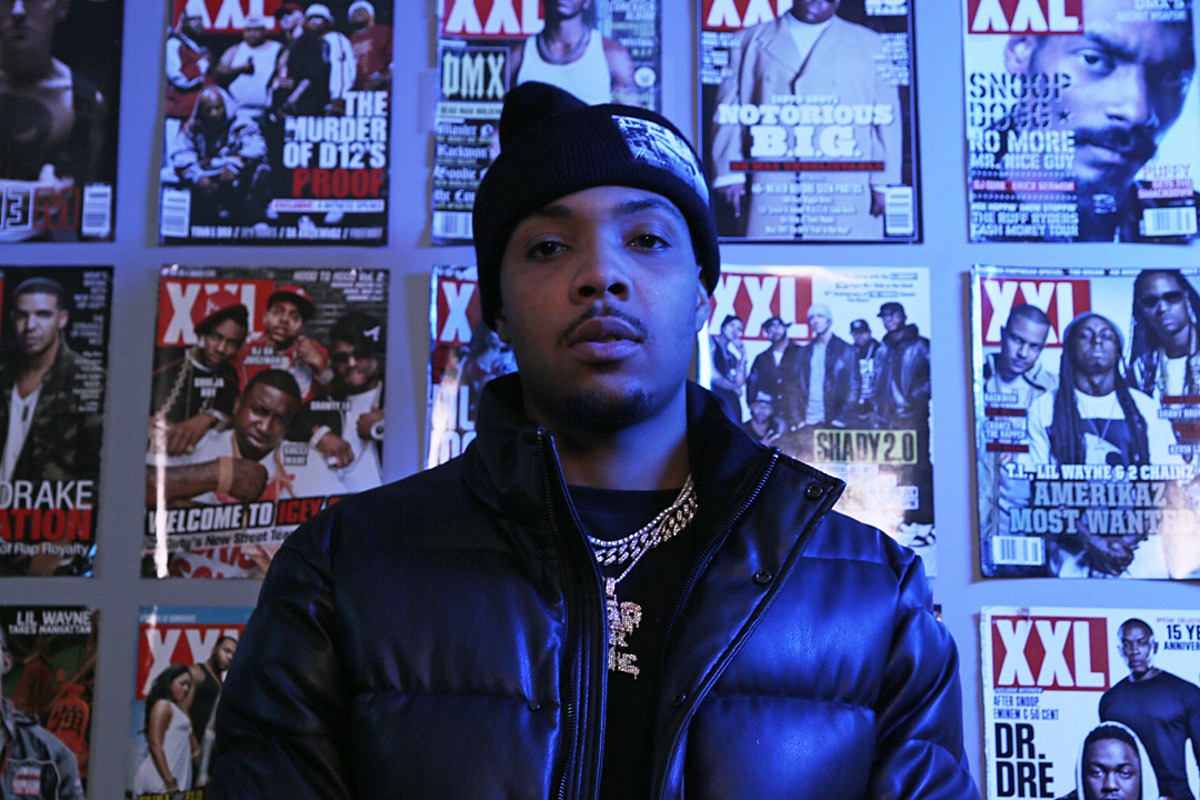 Several years into his rap career, G Herbo's rap skills remain unfiltered and tinged with perspective. Ahead of his new PTSD album, arriving Feb. 28, he channels the streets of Chicago in an XXL-exclusive freestyle that evokes the trauma, menace and hunger that helped propel him to stardom years ago.

Standing against the backdrop of classic XXL magazine covers, Herbo contextualizes his status in the rap game as someone who feels they've been passed over for the No. 1 spot. "Chain's on me, all glistenin'/Blur a bitch vision, difference is you in that 560, I'm in that 650/Ja Morant, you didn't pick me/Bitch grizzly, thought I lost it but I really didn't," Herbo raps, referencing Ja Morant, a Memphis Grizzlies rookie point guard who was picked at No. 2 behind Zion Williamson in the 2019 NBA Draft. Morant is now the favorite to win the 2020 NBA Rookie of the year.

At other points in the freestyle, Herbo vacillates between trying to ignore his ruthless instincts and embracing them. He colors that struggle with reminders of both his wealth and his fallen homies who can't enjoy it with him. "Thousand-dollar cashmere skullies on my head now/But niggas I was thuggin' with, getting money with, they dead now," he spits. "Pain in me, keep flames with me, I blackout just see red, I/Wised up, might contradict myself on shit I said/I be tryna slow up like, 'Nigga, Herbo use your head.'"

For Herbo, who's dropped off three projects (Swervo with Southside in 2018, Still Swervin and Sessions in 2019) over the last two years, bars like the ones found in his new freestyle echo the shell-shocked reality of his life in the trenches. They also help give weight to the title of his new project, which is named after Post Traumatic Stress Disorder.

"I named the project PTSD because I wanted to spread awareness on not only my situation, but everybody else and so many other neighborhoods and kids just not even in Chicago, all over the world that suffer from these mental illnesses, these mental health diseases," Herbo says of the name for his project, which will drop on Feb. 28.

"We don't know it. We immune to it in a way where you feel like it's OK to carry guns, or it's OK to think that your fate might one day result in you doing life in prison, or may result in your mother having to bury you before you're 21, 25 years old," adds the Humble Beast artist. "That's a sickness that we believe that's normal to us."

The normalcy of paranoia and death are themes stitched into the seams of Herbo's catalog, whether it's songs like "Malcolm" or any number of tracks from his Welcome to Fazoland series.

Having navigated the streets of the Chi and lost friends to early graves—his two friends, Fredo Santana and Juice Wrld, died of cardiovascular disease and a drug overdose, respectively over the last two years—the 24-year-old rapper has no choice but consider his proximity to death. Mortality is the face of his new project.

"I lost 50 friends," Herbo says of his PTSD cover, which includes Juice Wrld's likeness as one of the 50 stars on the flag featured in the artwork. "That's why the cover of the project is me holding the American flag with one of my homies' face representing a star for every state. I got 50 deceased homies on this flag and I'm carrying it, just to bring people into my world. This is reality."

A part of bringing fans into his world involves his PTSD Tour, a trek that will take him everywhere from Brooklyn, N.Y. to Atlanta to Los Angeles and more. Herbo, who was picked as an XXL Freshman in 2016, says he's been paying extra attention to rehearsals ahead of the new tour. He feels the trek, along with his new album, arrive at a point where he's able to focus almost exclusively on music for the first time in his career, which took off pretty fast.

"I had a song with Nicki Minaj at 18," Herbo recalls, referring to his 2014 track "ChiRaq." "I was still a kid, I'm still adjusting to having money, let alone fame, being in the streets balancing my life out. So I had to learn a lot over the years. Feel me, everything is cool, I learned a lot over the years, you know what I'm saying? Everything was cool, it made me who I am today, but I feel like I was never focused on being an artist."

See 25 Things Rappers Are Cooler Than