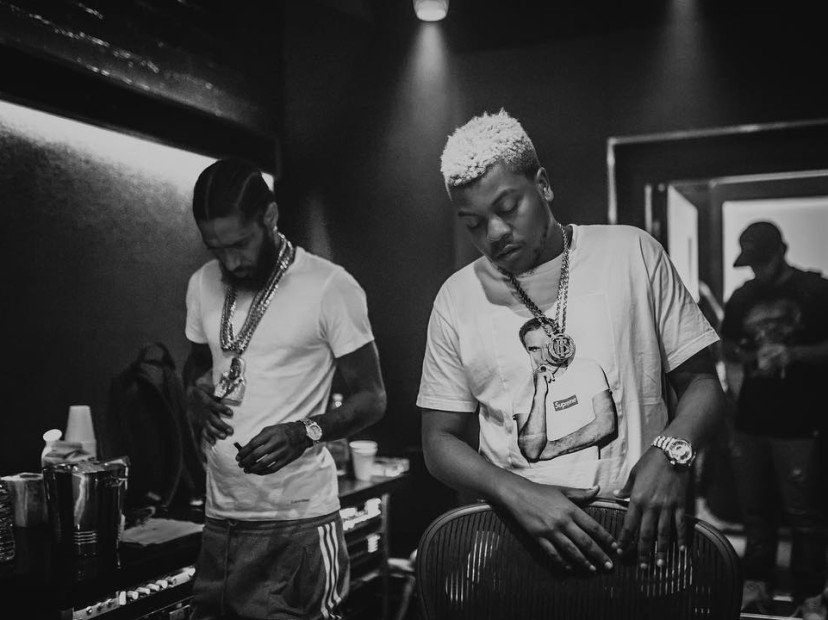 It’s been a little more than a year since the passing of rapper and community activist, Nipsey Hussle, and the Hip Hop community has made sure to keep his legacy fresh. In Los Angeles, specifically, Bino Rideaux came to know the late All Money In founder as both a cohort and a friend.

The two worked together on songs like “BIA,” “None Of This,” and “Clarity,” the latter of which also featured Dave East. Since Nipsey passed, Bino has done his part to make sure that the Marathon continues with songs like “Of All Things” and his recent single “Pride To The Side.”

The first time the two connected came thanks to a FaceTime call that Nipsey made from Casey Veggies’ phone. After Bino got that green light, he went in ready to prove himself in what turned out to be a fateful night.

“The whole drive [to the studio] I was thinking like, I gotta get in there and show out, I gotta make a good first impression,” remembered Bino. “I get there and it’s all blue. It’s a vibe, all the lights is blue. It’s a lot of producers there. Mike & Keys is there, Axel Foley is there, everybody is just kinda chill, there’s white dudes just rolling blunts just back-to-back-to-back, like 20 blunts. Nipsey is just super chill, we’re just talking and he’s playing an instrumental,” he added.

Without much ado, Bino, as well as Nip, let their bars do the talking.

“It’s not a lot of back and forth talking, as much as just vibin’ out, feeling each other out. So, the beat will play and one of us will just jump in. The first song I just kinda sat back and watched and he just jumped in, he didn’t say nothing but when he came out he was like, ‘you hear something?’ I’m not gonna say no, so I jump in the booth and do what I do,” noted Bino. “Literally after that instant, it was just a given that this is what it is. It wasn’t like a crazy thing. He doesn’t force knowledge on you, it just comes off so natural, you just learn a lot from meeting the nigga. I’ll never forget it. That first song that came out of that session was ‘The Field’ and that same night Young Dolph came and finished his verse.”

As no stranger to concrete jungles, Bino has seen firsthand the separation that has led to so many territorial feuds in the inner city. He also saw how Nipsey broke down some of those color lines.

“I know there’s a lot of separation, especially in Los Angeles. Nip was kinda like the glue for that. For instance, I didn’t know Nip at the time but I saw a clip where he ran into ScHoolboy Q in the city. His hood and ScHoolboy Q’s hood are like the worst enemies, so everybody was kinda wondering what’s gonna happen,” said Bino. “Nip showed love. It’s always been love with Nip, like even if I catch wind that he don’t like a nigga in the industry he showed love, it’s always been respect. He always wanted good creative energy. He’ll leave before he be in a situation where he’s gonna disrespect [someone]. His creative process was just always a vibe,” he added.

As fate would have it, Bino Rideaux would become a father around the same time he lost a friend. It was a spark of light at a time muddled in darkness.

“I’m the type to look at the positive. Around the time that dude passed, I had a daughter on the way and so, it was a real bittersweet moment in my life to manage both situations. I just felt like the best thing I could do was just keep going, to change something within myself to improve after that moment. There’s positive in everything and negative in everything so just keep going.”

As Bino embarks upon making new music it was only fitting that it would be his daughter that gave him the drive to take his game to the next level.

When you’re not a parent and you’re in the streets doing whatever you can kinda slack a little bit, but as a parent, you have no room for error. You gotta do it. Artistically I really feel it in the booth. I’m not just in there singing for just me no more. I’m not just singing for the love of music, this is what’s gonna feed my kid,” said Bino. “Now I’m looking at a different tier of rappers as competition. I’m motivated to go beyond my own expectations for my kid.”

In the process of recording new music (Bino said Sixtape 2 with Blxst is coming) the “Bozo” rapper had a chance meeting with a rap OG while meeting with another one of the West Coast’s prized MCs.

“Jay Rock called me one time to come work and we just ended up catching a vibe and just talking for like three hours in the studio. Ty Dolla $ign gave me a lotta game and randomly Project Pat was there. He was real cool. It was random. It just be random shit like that. I didn’t even know he knew who I was. It’s like being in high school and running into niggas that heard about you,” noted Bino. “That’s my dog. We been trying to get [a song together] in, I’m just trying to find the right record for him. He a legend. I got the utmost respect for him. I fuck with Three 6 heavy.”