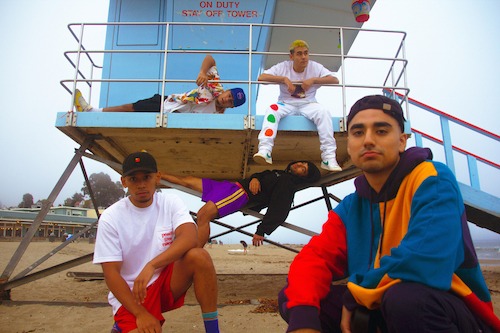 Clash spoke to LA-based Peach Tree Rascals while they were in their native California. The collective formed organically as a group of friends from the Bay Area, California. The five piece write, record, and produce their music and find common thread in their first-generation immigrant upbringings.

With 15 million streams and counting to their name, we asked what that felt like. Tarrek [Abdel-Khaliq] answers modestly, insisting that “it doesn’t seem real, honestly. It was just making music in the shed,” while Issac [Pech] takes a different approach, commenting: “It feels really real because this is what we wanted”.

Producer and mixer Dominic [Pizano] adds: “I agree. We worked our asses off”.

Current single ‘Things Won’t Go My Way’ is about “things not going your way,” laughs Issac. Creative director Jorge [Olazaba] explains: “For me, ‘Things Won’t Go My Way’ is about trying to show that sometimes you could just have a really bad day. We wanted to show it in a funny way, in a Peach Tree way where you can still laugh at yourself. It’s always good to be able to laugh at yourself”.

Meanwhile Tarrek elaborates: “Like when things don’t go your way but you find peace in that, knowing you don’t have control and letting whatever happens happen”.

The collective have recently signed to 10K Projects and it’s a big moment for them but they’re not letting it get to their heads. They’re staying focused on the music and their long-term goals.

Issac says: “It feels kind of great yet I’m kind of grounded because it’s technically part of the long-term plan but growing up you always kind of look at label deals with some type of amazement. Being able to partner with a label such as 10K/Homemade, as a child, it probably would be a dream come true but, as of right now, it’s a great step in the right direction.”

Their influences are derived from an eclectic, contemporary mix including Frank Ocean, Kendrick Lamar, Stevie Wonder, John Mayer, Tyler the Creator, Chance the Rapper and Alabama Shakes. “Basically everything. Anything that sounds good”.

Peach Tree Rascals want to thank their fans for their support. “I want to let them know that it’s cool to like our music,” says Issac. “We’re very happy that they find our music listenable at all and thank you for listening”.

Tarrek adds: “When we make music, we make whatever feels good. We don’t worry about a genre or a sound so people that tune in, you can listen to our catalogue and it doesn’t really have one sound. Every song has its own feeling. We don’t really have a genre”.

What is next for Peach Tree Rascals? They took a moment to think. They talk about their new single and music video release. “We’re just going to keep working for the rest of the year and make sure that shapes out to be exactly how we want it,” says Issac. Tarrek insists the band also want to “try to hit the road as soon as possible”.

They seem to be itching to go out and play some live shows but appreciate that “with the current situation, that’s not possible”.